Where Do Sashas Come From? 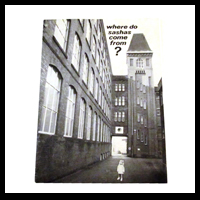 I had the pleasure of representing Sasha Dolls in the early 80’s when International Playthings was the distributor. From that I developed a love for the beautiful simple design of these timeless dolls designed by Sasha Morgenthaler and am happy to share both my collection of dolls and various brochures, newsletters and articles that I find in my files in this blog and online at Art Of Toys. .. starting with the brochure produced by Trendon Ltd in 1982 (this was 4 years before the announcement of closing the factory)  I will type out text so information is available. Scanned Photographs are by Cyril Lindley of Cheshire Life Magazine.

where do sashas come from?

It is sixteen years since we decided to find a doll design that came away from the humdrum sort of creatures which we , as well as everybody else, were then producing. We went to toy fairs, we saw designers, we searched Germany, Italy, France and the United States, we almost gave up.
Then our attention was drawn to a photograph in the Swiss magazine “Graphis”. It was of an original Sasha Doll, designed and made by Mrs Sasha Morgenthaler. We sent a telegram to Mrs Morgenthaler and hopped on a plane to Zurich. When Sasha Morgenthaler opened her door, she was not at all keen to let us use her design. She was suspicious of commerce. It took time to convince her that we did not want to exploit her doll, but that we loved and understood her conception and that we wanted to make this doll carefully and even reverently, preserving her quality. In the end Sasha Morgenthaler and we became friends. She was happy and enthusiastic that the doll could be made well in a factory and thus be available to many children instead of only the children of the rich or collectors.
The Sasha factory is an interesting and involving place. First of all our building: it started as a cotton mill in Houldsworth Street. Mr Houldsworth who owned the mill had built one and some years later another vast factory nearby. He also built houses for the people who worked in the mill, a school, a working man’s club, a little park in between the two factories and of course a church. His first factory was built in 1865. ours the “new” one was built 87 years ago. It is a good building, strong and handsome and we have taken pride in keeping it in good trim. there used to be a canal right beside us which brought raw cotton from gulf ports of the U.S. to the mill, from which it took spun cotton of the finest quality to the whole world.

Photo notes:  Top left: Moulding area  Bottom far left: Extracting heads from moulds  Bottom left: Spraying
Reddish- where we are- was a village until it grew and became part of the town of Stockport. Although in some ways it is still a village. People who work in the factory have often known each other from their early school days. Most live within walking distance from work. There is continuity. One girl told me about her mother who is now in her eighties, working in this factory when it produced cotton; she still lives in on of the Houldsworth houses. Another, that she had done her courting beside the canal, where once you could hire a rowing boat from the local pub and then have a beer there on your return.
When Sasha Morgenthaler first came to see us, she had never been in a factory. she feared a ‘dark satanic mill’. the atmosphere of friendly people working together was a surprise. After that she often came to stay with us and sat between us, teaching us to paint eyes, to cut and dress hair, whilst working herself.
We are not a lot of people; everybody knows everybody. There is a feeling of caring for each other. People know not only each other but each other’s families. Often the children go to the same school. there are visits and meetings outside working time. When a girl gets married, her colleagues dress her in the most grotesque fancy clothes and hang balloons all over her and so festooned she walks home from work with everybody who meets her smiling at her and understanding that she is going to be married the next day- this dressing up seems to be just a North of England custom.
This where the dolls are made.
Now production: we use the best machines we can buy or sometimes have custom built for us. Our moulding press comes from the United States, hair rooting machines are from Germany and Italy, assembly and hair combing machines were built for us in England by our associated company. Care and goodwill to make the doll as well as we possibly can is ingrained in all of us who work with Sasha.

At the time that Sasha Morenthaler designed her doll, there was no intention that it would ever be made in a factory. When we started manufacture, it immediadely became apparent that there would be difficulties. The moulding process we use is called rotational cassting. Usually when dolls are made by this method, their shape is adapted to the process to make it easy for the moulding to be extracted from it’s mould. Sasha Morgenthaler knew nothing of such problems and so the shape of the doll is beautiful, but moulding her is difficult. We have never changed the shape of the doll to make production easier by the fact that the doll was designed to be asymmetric like human beings are too, which makes her more life-like. Somebody once said “manufacturing is a series of tricks” – we still have plenty of tricks to learn.

When limbs, bodies and heads are moulded and inspected and found good, they come to the assembly floor. Sasha gets eyes, hair is rooted. These operations are done with meticulous care and consultation in case of doubt. A girl under a bright lamp, who has good eyes and a steady hand, gives every pair of eyes a little more expression using a very small brush. It is the same girl who has done this job since we started to make the doll, except for a break in which she produced a baby daughter. This baby is now thirteen years old and was carnival queen of Reddish this year, when most of us turned out to cheer her in procession. The annual carnival is another local custom and proceeds go to a school for crippled children near the factory- I better get back to production!

We put a lot of hair on Sasha. I remember as a child being miserable because a beloved doll lost her hair. This must never happen to Sasha. As the head is hard, we have to heat it well before the hair rooter can stitch though it. Visitors watching the swift conversion of a bare head into a gloriously haired one, often express the wish that they could benefit by a similar service. We have a machine which brushes the enormous mass of hair after it is rooted, but then our hairdressers take over and combs, brushes, divides and cuts the hair into a simple shape which a child can keep or convert into any style which appeals to her for her Sasha alone.

The next stages are assembly, dressing and packing. The packer is the last person to see that all is well, that the hair is neat, the eyes well finished, no spots or blemishes anywhere on doll or clothes. Sasha is packed with her head looking in a particular way, so when the doll is received, she already conveys her mood, instead of being inanimate.

When Sasha Morgenthaler dies, we had to make a conscious decision; we could go on making and dressing the doll in pastiches, using the same style as before, or we could let her be open to the influence of whoever would carry the responsibility for her survival. We decided that if we never introduced a new view, the doll would become stale and only a museum piece. So now I am dressing the doll – very carefully- considering what Sasha Morgenthaler might have wanted. She and I had a good accord and when I am pleased with a new outfit, I wish that she could see it and enjoy it with me. I am not a dress designer or a brilliant sewer- but I love this doll and dress her as I would dress a child. I like cotton and only use artificial fibres when they are more suited to a particular purpose. Clothes must be simple- but they must also have just a little nonsense for fun. When my granddaughter being shown a new outfit said “I wish I could have a dress like that” I felt Success. I must not forget our shoes; each one is shaped by hand over a last made from the Sasha foot, so as to guarantee a perfect fit.

All the joy which Sasha can give comes out of the will and imagination of her owner. Look at the photographs on the sides of the doll carton- it is amazing that different ‘children’ come from the same moulding. Only the way they are seen makes them different. 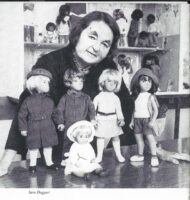 For available Sasha’s and brochures go to: